The path to antiquity

After I was pretty much finished with one of my last projects, we met again for a cozy round Saga with Mirco in the Stronghold hut. While talking, playing and drinking beer, the conversation came up with a new system that Mirco had included in its range, “Mortal Gods”. I had already seen a few pictures on the Internet and on Facebook and found the setting very interesting because I had never been on the road in this era. 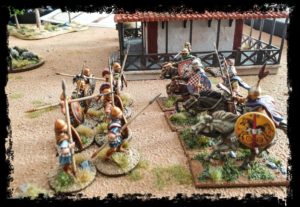 The basic box looked very promising and offered enough models for 2 game parties. I particularly liked the bases with the trio of 3 miniatures and I immediately played with the idea of ​​completely magnetizing everything. So I quickly packed the box with the Victrix models and immediately started building, priming and magnetizing for the next few days. When I have a new project, I’m a little obsessed and want to get the first models painted as soon as possible. However, our hiking holiday in Madeira came in between. So I have to be content with assembling and reading the rules first.

As soon as I got home, I immediately started and painted what I could. The models from Victrix are awesome and it was great fun to paint them and to provide the shields with the ingenious decals from Littlebigmen. After a medium-sized painting marathon, it was finally time for the test games. 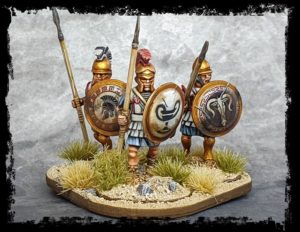 The game has a simple and easy-to-learn basic mechanics and really puts you in a good mood. The units are activated at random (markers in a sack). Your values ​​are recorded on beautifully designed cards and offer quick access to all special rules and special skills. The most impressive is probably the formation of a phalanx, which with 3 units consisting of 3 bases does really well on the game table. It takes some getting used to, however, that units that have been attacked cannot fight back in a melee. But you can get used to it.

A few weeks later, my friends from Team Würfelkrieger told me that another game system, “Clash of Spears”, would be released soon. I was delighted that my troops, which had been raised so far, would make a perfect starter army and I looked forward to a few rounds of test games with Evelien and Tobias at their Advent meeting. The game got me straight away and the mechanics were fluid and obvious. Now I had even more motivation to raise more troops for my “old Greeks”.