As part of this year’s Hobbyquest, we met to play a special scenario that we came up with for the Szenario Con in Bad Kreuznach. According to Christian, it worked very well. However, I unfortunately didn’t get to play, as I was trapped behind our stand. I had specially built the game mat and some of the small forests. 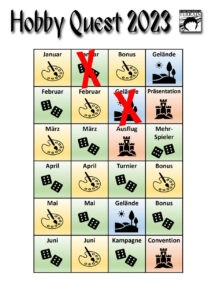 And it is precisely for such actions that I already love the Hobby Quest. It gives us another “excuse” and a timely impetus to indulge in our hobby. I really wanted to tick the box for a game in January. 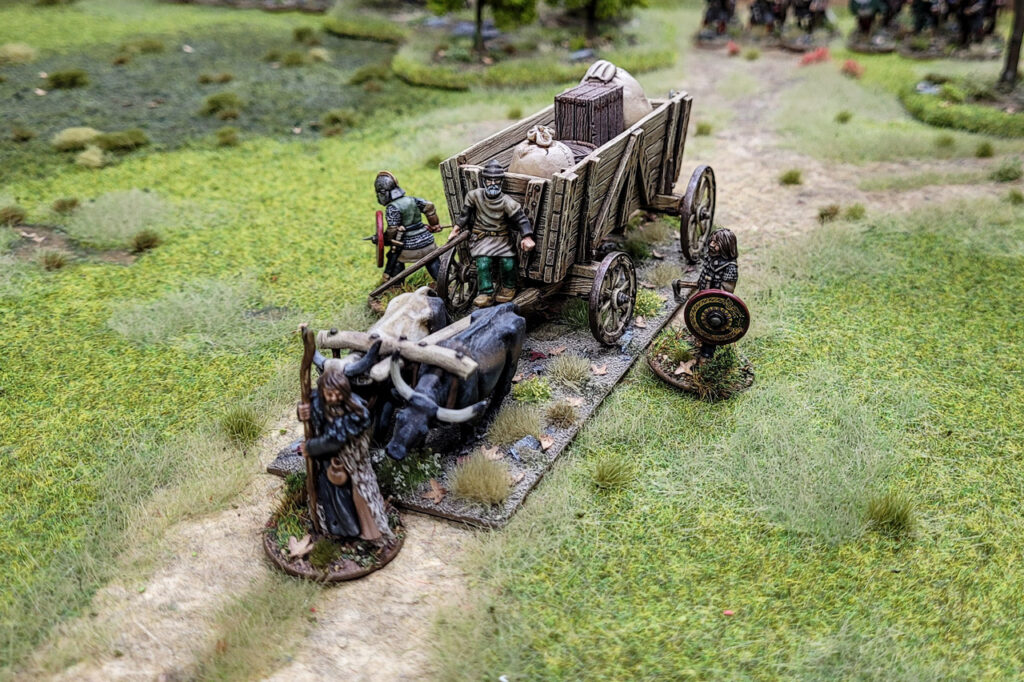 The scenario: Battle for the throne

Last winter, the universally disliked King Bertram of Liescheid passed away at the proud age of 78. Still on his deathbed, he imperiously instructed his eldest son Aldebrand, who had been cast out 30 years ago, to inherit the crown. Aldebrand is not yet aware of his good fortune, as he settled in the village of Haldern, some 15 miles away, after a quarrel with his father. So Bertram’s closest followers set off with Bertram’s crown to the tranquil village of Haldern to crown Aldebrand. The way leads the companions through two rival counties, which have heard of King Bertram’s death and want to raise themselves to king…

Place a cart in the centre of the playing field and a bodyguard of 4 Hearthguard to escort it.

Then place the terrain according to the Universal Method. No terrain piece may be placed closer than M around the cart.

DEPLOYMENT AND START OF THE GAME

The starting player divides his army into two groups with as many units as possible. He then places one of these groups completely within S of his side of the board.

Then his opponent places his entire army completely within S around his side of the board.

Finally, the starting player places the rest of his army completely within S around his side of the board.

The start player begins the game and his opponent rolls 3 SAGA dice before the game starts and places them on his battle board.

The cart may not be attacked on either player’s first turn.

If the cart is attacked successfully, its bodyguard moves between the cart and the attacker. Note that the attacking unit must be able to reach the cart with its attack movement. The attacking movement is only shortened by placing the bodyguard.

The bodyguard consists of 4 Hearthguard with Resilience (1). The bodyguard never retreats and automatically places 2 fatigue tokens at the beginning of each player’s activation phase.

If the bodyguard is eliminated, the driver of the cart fiercely defends the crown. The cart follows the rules for hawser units, but is never moved. The cart does not retreat in Melee and automatically discards 2 fatigue tokens at the beginning of each player’s activation phase. It counts as an enemy unit for both players (e.g. in terms of manoeuvres etc.).

If a unit takes out the cart in Melee, it is removed from the game table and the winning unit receives a mission objective marker (the crown). A unit that captures the crown cannot be activated again in the same turn and can never be activated for a move in the opponent’s turn.

If the cart is eliminated in ranged combat, place a mission objective marker in its original centre.

The unit with the crown cannot leave the playing field.

END OF THE GAME

The game ends after 6 turns by both players.

Afterwards, both players determine the massacre points they receive for eliminated enemy models. The elimination of the bodyguard and the cart is ignored.

In addition, the player who eliminates the last vHearthguard of the bodyguard receives 5 dmassacre points.

Another 5 dmassacre points are awarded for eliminating the cart.

The player who carries the crown (mission target marker) at the end of the game also receives 5 massacre points and another 5 if the unit carrying the crown is in contact with his own side of the field. 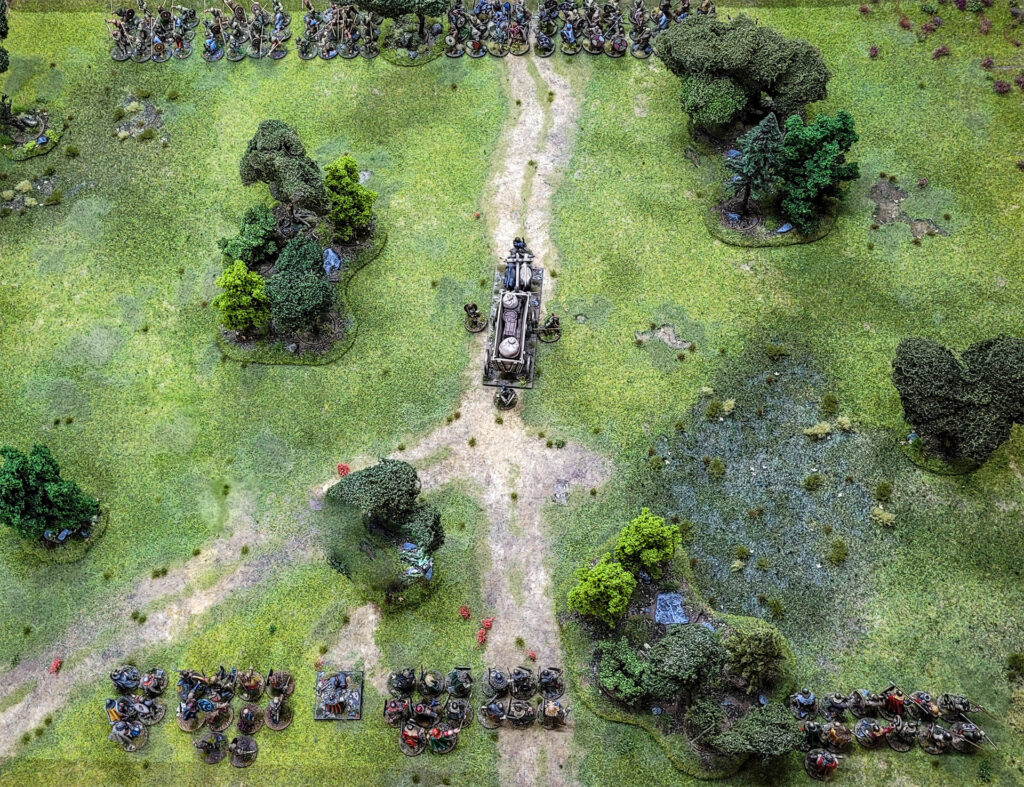 Christian (Lemmen) led 6 points of Anglo-Saxons into the field. The whole army consisted of units of 12 levies, one of which was equipped with bows.

I decided on Jomswikings. My line-up was 6 Hearthguard, 2×5 warriors with heavy weapons, 2×8 warriors, 1×10 warriors. 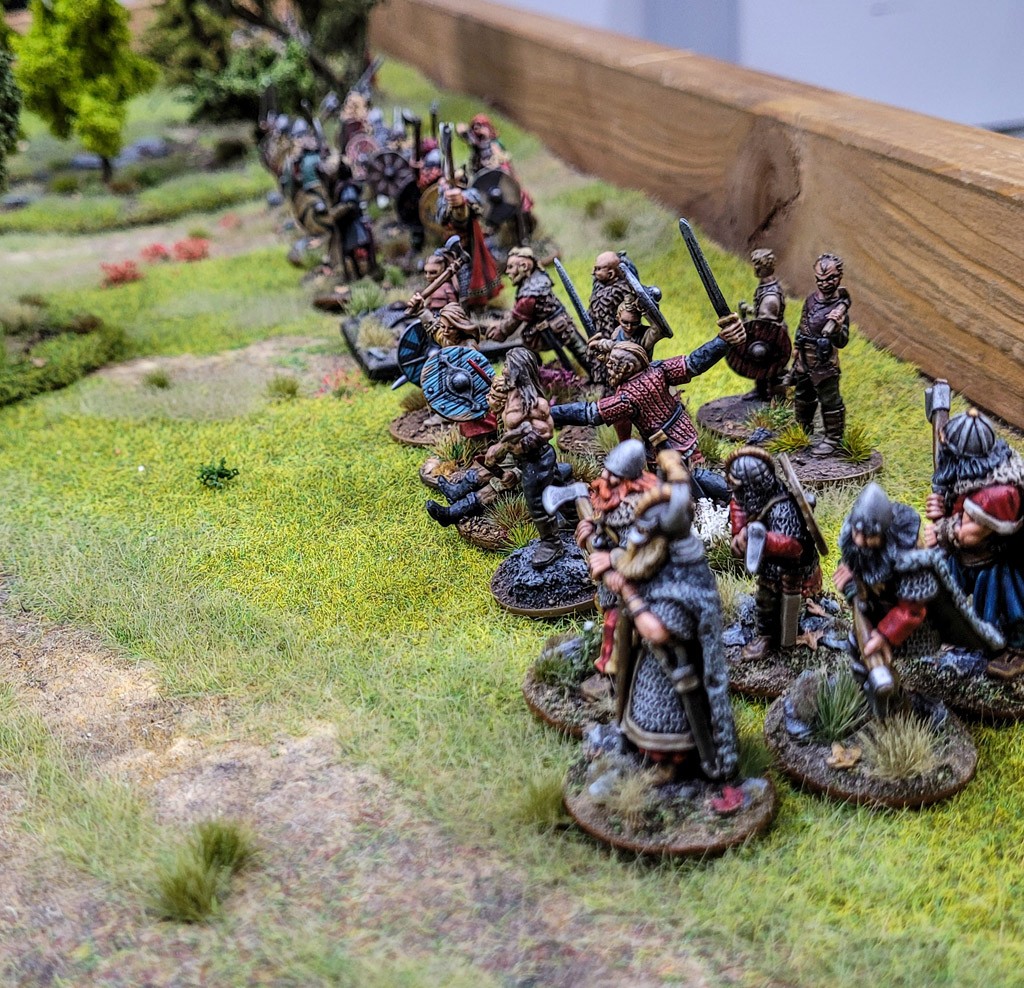 Christian was the starting player and aggressively positioned himself with his pawn hordes to be within striking distance of the cart for the second turn.

When Christian threw his 6 SAGA dice in his second turn, there was disbelieving silence on my part and gloating from Christian. 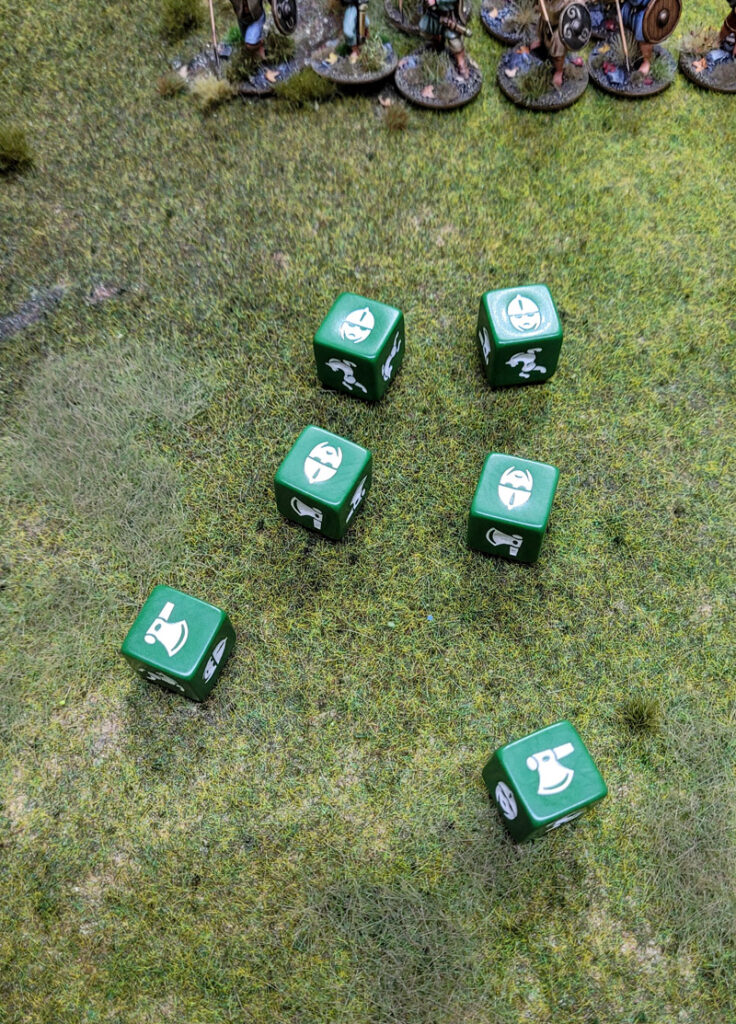 With this roll, Christian could plan his attack with all the bells and whistles that the Anglo-Saxon battle plan gives. With At Arms his pawns become warriors and with Never Surrender! he wanted to invalidate my possible counterattacks, as I get a fatigue marker on his 10+ units when attacking in the open. Both are command abilities, so Christian rolled up to 8 SAGA dice again with his remaining helmet symbols and activation pool. How wonderful! *nooooot*.

After the rest of the hullabaloo of abilities and activations was laid, the peasant assault on the cart followed. Heroically, even 2 Hearthguard of the bodyguard survived the first attack, but the second attack by a fresh pawn unit was too much for them. Now deaf Bernd, in his function as coachman, dismounted, cracked his knuckles and grabbed his club. But even Bernd’s heroism was nothing compared to incited Anglo-Saxon levies and so his end came very quickly and extremely bloody.

Not bad, the woodpecker. Already in turn 2, Christian was able to take the crown and still had enough activations left to move 2 units as a shield in front of the unit with the crown.

From that moment on, I had a real fatigue problem on one side, which lasted until the end of the game. On the other hand, despite the manifold wrath that Christian patronisingly granted me, I did not manage to get close to the unit with the crown. How I boiled with wrath. 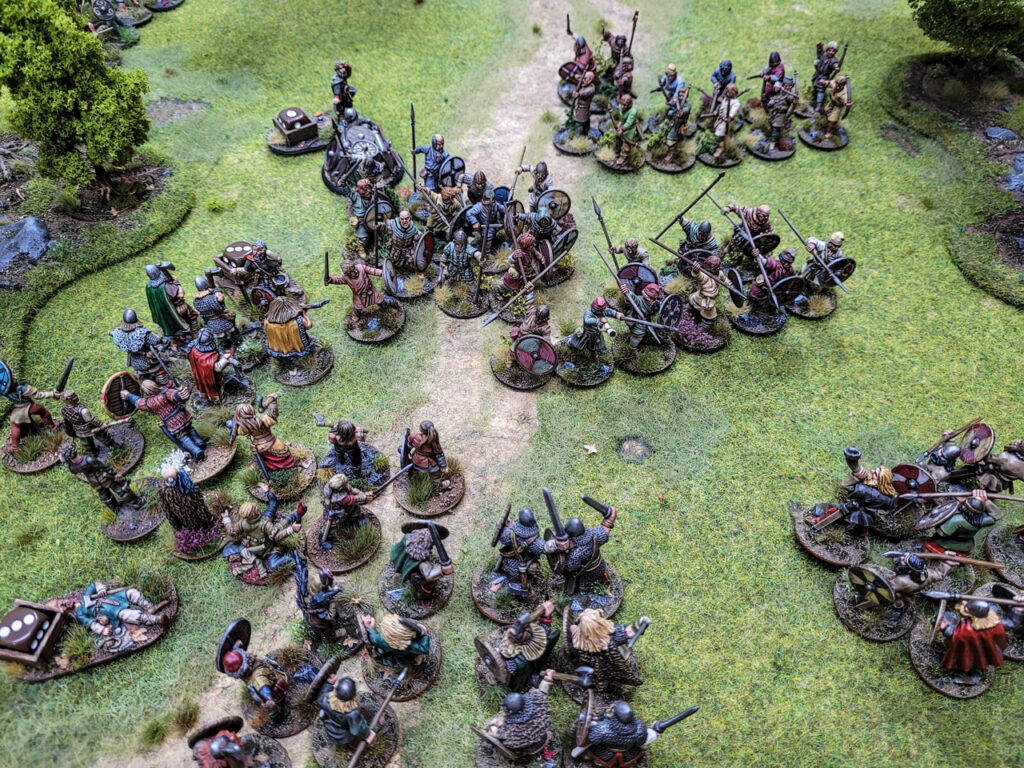 I engaged Christian’s remaining units in bloody close combat for him, in which the wrath granted to me raged terribly. In addition, I repeatedly used the Singing Steel ability, equipping a variable number of units with javelins until the end of the turn and activating them for one move. With well over 40! rolls, I did not succeed in eliminating even one lice-ridden levy in ranged combat, as Christian mastered all really ALL defensive rolls.

Already in the third turn, Christian was able to move the unit with the crown off the field. This was part of the original scenario, which we then adapted. With a total of 20 dmassacre points (bodyguard and chariot equipped, crown captured and moved off the board), the game was almost over for me, but I was just too angry (what wonderful Jomswikings wrath puns are possible) to admit defeat.

In the following moves I wiped out various Anglo-Saxon units with a total of well over 40 models and made Christian’s warlord a head shorter, so that at least this scoundrel can definitely no longer become a king. Christian fought a rather cowardly (gloat) retreat battle and avoided my raging fury as much as possible.

After 6 moves, only 2 of his units were left and I had lost just 5 models by then.

Nevertheless, Christian’s spirited capture of the crown narrowly saved his victory over time, whoever was left for the coronation after that.

It was a terrific game and already today my wrath has fizzled out.